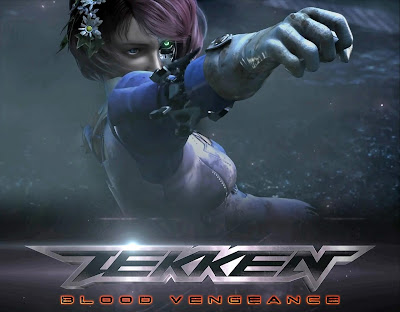 Tekken Blood Vengeance is a 3D animated film by Bandai Namco Games, Namco Pictures, and Digital Frontier. It's the finest Tekken movie you can get so far and we feel so excited to talk about this movie.

Unlike previous Tekken movies (both animated and live), the main heroine in this Tekken movie is Ling Xiaoyu. I've not religiously followed Tekken since Tekken 3 but I think I can relate well to the story.

In Blood Vengeance, Xiaoyu works as a secret undercover agent for Anna Williams, who in turn works for Kazuya Mishima. They're investigating a certain highschool student named Shin Kamiya. Shin is also a target of another party mainly lead by Jin Kazama and Nina Williams. Well what are the odds that father and son Jin and Kazuya would meet again?

The cast of characters is quite ok. It's not complete but was fine since most of the characters fitted the story well. Others might feel bad because their favorite characters like Forest Law, Hoarang, Brian, King, Yoshimitsu, Paul Phoenix, etc. doesn't make an appearance while some less known characters like Ganryu does. I'm also a little bit surprised about Lee's (adopted son of Heihachi) role in the story as he seem to have turned into some kind of joke. Lee's role in the Anime version was more of a villain type, Anna at Nina were also fighting for him somehow and things just turned different on this one. Again, you won't be pointing to the TV screen so much saying "I know that character!".


The battle scenes were fierce, really action packed and well thought through martial arts. The CG was close to perfect, the facial expressions were good, and like I said earlier, the animation in battle scenes were gorgeous. The voice actors blended with the characters alright, but somehow it felt like they were trying too much.

The plot is something to puzzle you for a while, but it's not so deep. The story having to do with Jin Kazama's genetic information being experimented on and all that. In the end, it's the three Mishima fathers who fight with each other again. Of course, Heihachi would never fail to impress you with his durability even at his age. The timing of the events seem to happen between Tekken 5 and Tekken 6.

I kind of liked how the cyborg Alisa played her role in the story and she's a new introduction to the series. Alisa Bosconovitch somehow plays the role of innocent as well as villain. You will see Alisa with Xioyu here most of the time since they're enrolled on the same school to make an observation on Shin Kamiya. Moreover, I liked how Xiaoyu developed as a character here. I was not able to appreciate Ling Xiaoyu's character that much in Tekken until I watched this movie.

The Devil Jin and Devil Kazuya looks different here than we ever got to see them. They seem to be more highly evolved here and are in their more powerful states (like the Devil Man anime). During the devil fighting scenes, it becomes a little dragon ball-like fighting style for a  short while.

Some people whine about how they wish that this was a live action film. However, we've already seen how that turned out and it wasn't nice. I believe it would be really hard to depict game characters to live movie actors so it's a really good decision that they made this a full CG film.

Overall, Tekken Blood Vengeance is a movie that is well put together. Good CG, great voice acting, an interesting plot and a well-defined ending.

Tekken Blood Vengeance comes as bundle with Tekken Hybrid (with Tekken Tag) or with the 3DS game Tekken 3D Prime Edition as a 3D movie. The CG film is also available as a standalone movie in  Blu-ray and DVD formats.