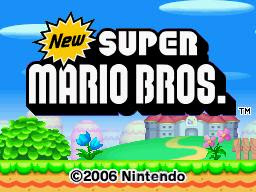 New Super Mario Bros. brings an all new Mario adventure to the Nintendo DS. If you miss all those running around, stomping on enemies and jumping on platforms then this will surely be interesting for you!

The main plot of the game is the same as every Mario game, that is rescuing princess Peach after being abducted. The main goal of the game is to finish each area on the map until you get to a castle and fight the boss so you could proceed to the next map and rescue the princess.

The play style is somehow similar to Mario 3 and Super Mario world where you get to move on a map and complete one area before you can proceed to another. You will be fighting different bosses on each castle including Bowser and Bowser Jr..

The game graphics is 3D on 2D plane and maintains the side-scrolling nature of the older series. The animation has improved a lot, not just Mario but also the enemies. 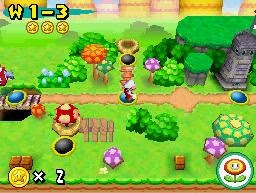 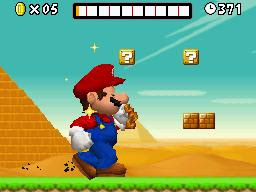 Several gimmicks were employed in the game. For example, aside from eating a mushroom and then getting bigger, or getting a flower and be able to shoot fireballs, Mario can now grow into a giant Mario! Yeah, you can just run through everything that gets in your way. However, this does not prevent you from getting dead when you fall off a pit. Mario can also get really, really, really small which you need to do if you want to fit on certain areas in the game and get some bonus stars.

The physics has somehow changed which makes Mario a little difficult to control. This makes the game a little frustrating. This is both a good and a bad in the game because new features such as being able to jump against walls is somehow very helpful.

The game utilizes the touchscreen very well by providing a mini map below. The mini map allows you to see the worlds you're in, the worlds you've been and will be after completing the current level.

The lower touchscreen also allows you to store reserves of your power-ups. For example, you can make a flower reserve in case you get hit by an enemy. This increases your chances of survival and makes the game less frustrating. 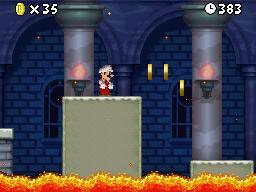 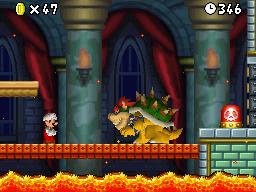 What I didn't like in the game is that I can't save anytime I want. Or, they should've at least made it so that I can save anytime on the map and not just when a special event takes place like when you beat a boss or unlock a special place. But I guess there is a purpose for that as the life system is maintained which is basically how many retries you have before it's game over.

If you don't feel like playing the main story, there are mini games that you could spend your time on such as action, puzzle, table  (e.g. card games) and variety (which makes a lot of use for the stylus) which you can either play as single player or multiplayer.

The music in the game is as great as ever. You know, the kind that sticks to your mind even after several weeks or months that you stopped playing the game. The old sound effects are preserved which adds up to the nostalgia. Mario also talks a little now in Mexican accent.

New Super Mario Bros. for the Nintendo DS is both a refreshing and nostalgic experience compared to past installments. There will always be people who will prefer the side-scrolling version over the full 3D versions. Nintendo has successfully integrated the new features with the classic elements, and the result is this great game.

I really love this game and I play it all the time on my iPhone. I played all the version of this game and now waiting for this version.